Tobacco consumption remains the single largest preventable cause of premature death in Europe. It has driven tobacco control academics, activists, and organisations in Europe and around the world to, again, come together in The 4th ENSP-SRP International Conference on Tobacco Control in the capital of Romania, Bucharest. The event held from 27th to 29th March 2019 was organised by the European Network for Smoking and Tobacco Prevention (ENSP) in partnership with the Romanian Society of Pneumology (SRP) with the spirit of achieving “Tomorrow’s sustainable development starts now- time to accelerate tobacco control!”.

One day before kicking-off the conference, on Tuesday, 26th March 2019, global leaders in health and human rights assembled in the unique and historic event, the Global Forum on Human Rights and a Tobacco-Free World at Cotroceni Palace, Bucharest. The aim of the forum was to acknowledge the nexus between tobacco control and human rights effort in combating the tobacco epidemic globally.

The main conference was launched on Wednesday, 27th March 2019 by inspirational speech from Vytenis Andriukaitis (European Commissioner on Health and Food Safety), Vera Luiza de Costa e Silva (Head of WHO FCTC Secretariat), Miljana Grbic (Head of WHO office Romania), José Luis Castro (President of The Union/Vital Strategies/NCD Alliance), and Prof. Stephen P. Marks (Professor of Harvard T.H. Chan School of Public Health). Thereafter, a sequence of parallel sessions was taking place in the venue involving a wide range of relevant and novel works in tobacco control area: youth and tobacco, taxation, and healthcare professionals’ role in tobacco control. The results from EUREST-PLUS and JATC projects were also presented to the audience on that day.

The second day of the conference was started with a plenary session about Tobacco Illicit Trade which highlighted the importance of governments to strengthen countries’ supply chain control. Apart from a series of parallel oral presentation by participants, the conference was enriched by workshop on Mapping and Exposing Tobacco Industry Front Groups in Europe (organised by Campaign for Tobacco-Free Kids) and Tobacco Control and Human Rights (organised by ASH US).

The last day of the conference was wrapped up with TackSHS project’s results presentation, the rest of research presentations, and marked by the adoption of declaration by participants. The declaration recognises the value of combining efforts of the human rights and tobacco control communities to eliminate tobacco epidemic, and call on governments to fully comply with their obligations under the WHO FCTC and human rights treaties they have ratified. The conference also showcased many scientific posters from researchers across Europe. The next ENSP Conference on Tobacco Control will be held in Paris in June 2019. 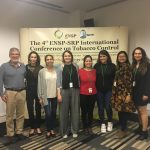