Tobacco Control in Spain: Lights and Shadows – a seminar at UCSF

A few days ago I had the opportunity, “lucky I” I should say, to give a talk at the Center for Tobacco Control Research & Evaluation led by Professor Stan Glantz at the University of California San Francisco. The title («From partial to complete smoking bans: what we have learned in Spain» ) explains quite well what it was … I just wanted to explain what happened in Spain , how we were able to overcome the old » Spanish model » loved by the tobacco industry, how we changed it and how we got one of the best smoke-free laws in the world –the whole talk dressed with results (derived from our studies) showing the changes in these few years in Spain. Find the presentation here, and spend a few minutes browsing our slideshare collection with other presentations in tobacco control.

In 2006 the law was enacted (Law 28/2005) and banned smoking in enclosed public places, transport, and indoor workplaces. However, bars, cafes, and restaurants were partially exempt. Law 28/2005 allowed smoking areas covering an area of over 100 m2 and if the place was less than 100 m2, the owner could decide smoking or not. This Law got some support of the tobacco industry and it was promoted in other countries as a less-unfavourable legislative model ( «the Spanish model» ). However, the assessment of the levels of nicotine in the air and cotinine in workers hospitality showed inequalities: although there were large reductions in exposure in the premises with strict prohibitions, exposure remained high in places where smoking was allowed, and in some cases, exposure was even higher than before the law. Other surveys showed over 70% support for a total ban on bars and restaurants. As a result of the campaign promoted from different sectors (National Committee for Smoking Prevention and scientific societies, citizenship (www.porquenosotrosno.com), journalists, trade unions , … ) , the Law was amended in 2010 and now smoking is banned in all bars and restaurants. Moreover, the new Law (Law 42/2010 ) extends the smoking ban to health centers and schools (both indoors and outdoors), and outdoors playgrounds. The impact of these measures has been tremendous , with reductions of 90 % of snuff -hand smoke in bars restaurants. What did we learn ? It seems so clear, but these results and experience (the story I’ve explained) show that partial bans do not work, and public health scientists and society (consumers, citizens’ organizations , trade unions … ) can join forces to convince politicians to change their opinions and act . 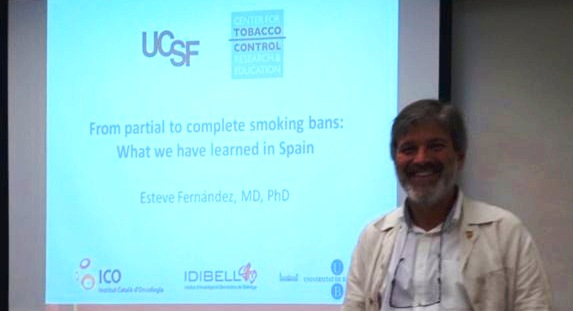 The twenty attendees, with Stan Glantz as emcee, made questions from the beginning to the end, about the smoking epidemic in Spain and the laws, or to know details of the studies I was presenting. The final debate went around the possible relaxation of Law 42/2010 due to the pressures of the mogul Adelson to allow smoking in the casinos he wants to build in Madrid. In fact, the final message I tried to give, besides presenting the Spanish experience as an example of improvement of a partial law into a total one, was the need to prevent regressive changes as those currently threatening us.

PS1: Have you endorsed the campaign “Don’t touch the law?” 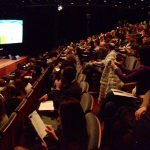